On Monday evening, I will travel to Mumbai, India. I am going there for a research project in which we are trying to assess the risk that Mumbai might someday be hit by a tropical cyclone, particularly one strong enough to cause a significant storm surge and a major disaster for this low-lying coastal megacity. The problem is scientifically interesting – and difficult – precisely because such an event has not happened in modern history. So one can’t use historical data as a guide, although we know the risk is not zero – we believe that it has probably happened sometime, but it’s very rare our records are just not long enough. One has to use models of some kind to assess the risk, and our problem is to develop, evaluate, and use those models. (And climate change is most likely increasing the risk, but that’s another issue.)

Anyway, at this very moment there is a cyclone, named Ockhi, in the Arabian Sea. It is forecast to pass quite close to Mumbai on Tuesday evening, precisely when my flight (booked several weeks ago, and planned long before that) is due to arrive there! 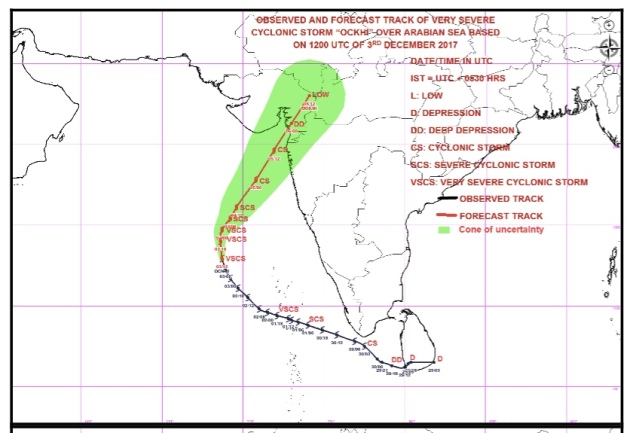 While the storm is pretty powerful now, it is forecast to weaken a lot before landfall, so it will probably not cause a major disaster. And the models have it making landfall a bit to the north of Mumbai anyway (although with the uncertainty in the track forecast, a more direct hit is still possible). So this probably won’t be quite the disaster our project aims to address, but still, the coincidence is profoundly spooky. There are only 1-2 cyclones on average each year in the Arabian Sea, and most of those never come anywhere near this close to Mumbai. It’s an *extremely unusual* event, and it’s happening *precisely* as I’m coming to town to study it.

Some further commentary on Harvey. Mostly (but not all) about the climate connection.

Why Harvey’s devastation is so severe (CNN)

Climate Change Didn’t Cause Hurricane Harvey, but It Made It Worse (Fortune)

Commentary by Columbia Scholars (not just me)

Meanwhile, Hurricane Irma is breaking records and looking truly fearsome in the Atlantic.

I have a post up at the Columbia Earth Institute State of the Planet via the Initiative for Extreme Weather and Climate, on the current El Nino event, recent Madden-Julian Oscillation, typhoons and hurricanes, and everything else going on in the tropical Pacific now, as well as its impacts on the US, and the ramifications (including some pretty speculative ones) for the global climate.

I’m making it a bit of a mission to recruit younger colleagues, especially postdocs and graduate students, to try writing for nonscientist audiences. In this piece, new PhD Madeleine Lopeman (Columbia Civil Engineering, just defended her thesis, advisor Prof. George Deodatis), explains how her innovative extreme value analysis of tide gauge data at the Battery yields a lower return period for Sandy than all previous ones – meaning maybe it wasn’t all that rare an event after all.

An interesting question is what relationship there is, if any, between return periods defined for different characteristics, either of the storm itself or its impacts. Tim Hall and I published a paper in 2013, for example, that estimated a 700-year return period (95% confidence interval 400-1400 years) for the track of Sandy – strictly, for a storm with at least category 1 intensity intersecting the New Jersey coast at an angle at least as steep as Sandy’s track did. Despite the different numbers, our estimate could be consistent with Madeleine’s, because the numbers describe two different things. It’s reasonable to expect the return period for the flood at the Battery to be shorter than that for the track, because one could get the same flood from tracks coming in at shallower angles if the storm had stronger winds, or made landfall closer to NYC.

A quick reflection on the workshop we just had, on the Columbia Initiative for Extreme Weather and Climate blog.

Tomorrow, May 6, we’ll have our first science workshop for the Columbia Initiative on Extreme Weather and Climate. Here is a post I wrote on the Initiative web site explaining what the point of it is.

I am giving two talks tomorrow. Both are big deals, by my humble standards. Either one alone would be enough to make me a little nervous. But excited.

In the morning, I’m speaking in TEDx Broadway 2015. I’m going to talk about climate change. Why talk about climate change in a conference about the future of Broadway, in which most of the other speakers are connected to the theater industry in some way? Well, Broadway is on planet earth too… beyond that, if you’re not going to the event, you’ll have to wait til the video shows up on the internet.

In the evening, I’m speaking at Columbia, in the Low Rotunda under the big dome, in an event that is part of the President’s World Leaders Forum series, to launch our new Initiative on Extreme Weather and Climate. We have an outstanding panel of four speakers who will be talking about what we have learned in the two and a half (almost) years since Sandy – about how to make the City more resilient to extreme weather; about how science, government and industry can work together; about what lessons the rest of the world can learn from NYC’s experience and vice versa, and so on. I’m the moderator of the panel.

Before the panel discussion starts, I’ll speak for a few minutes about what the Initiative is and what its goals are. If you can’t make it (it’s open to the CU community, but registration is required and I believe there is a wait list by now), you can go to the web page which we will have up by the time of the event, at extremeweather.columbia.edu, to learn about the Initiative. You can also follow @CUextremewx on twitter.

For now, I’m polishing my talks. And I got a haircut.