So while Vongfong was the big weather story a few days ago – when it reached intensities close to Haiyan’s last year – it is now down to low category 1 intensity, and forecast to weaken further before reaching Japan.

In the meantime, a new tropical cyclone has formed in the Bay of Bengal, strengthened dramatically, and is now in the process of making landfall in Visakhapatnam, Andhra Pradesh, on the east coast of India. The peak winds are estimated by JTWC at 110 knots, a high category 3, nearly category 4 cyclone. This has the potential to cause great destruction. The image at top shows the most recent enhanced infrared satellite image of Hudhud, taken from CIRA.

Here is a recent story in the Guardian reporting that “hundreds of thousands” of people are being evacuated, and a story in Slate by Eric Holthaus. As Holthaus notes briefly in his story (and more on twitter) the India Meteorological Department has estimated Hudhud’s intensity at much lower values than other agencies have; IMD currently is calling Hudhud a 90-knot storm as opposed to JTWC’s 110). But the mass evacuations attest to the seriousness of the Indian government about this storm. Cyclone Phailin, last year, was similarly powerful, and also was the subject of dispute between IMD and foreign meteorologists, with the IMD calling the intensity lower in that case as well. The preparations and evacuations for Phailin were remarkably successful, keeping the death toll very low by historical standards. Hopefully the same will be true this time.

Here’s a surge and inundation forecast from IMD, predicting peak values in the 2 meter range for Visakhapatnam.

Typhoon Phanfone has been closing in on Japan for days, and is in the process of making landfall as I write.

The storm earlier had made it to the bottom end of category four on the Saffir-Simpson scale, with peak sustained winds of 130 knots and a very small “pinhole” eye. The pinhole eye is almost always a sign of a scary storm, because the way tropical cyclones develop really strong winds is by contracting their eyewalls inward. As with a skater who pulls her arms in while she does a spin on the ice, conservation of angular momentum increases the rate of rotation because the distance from the axis has shrunk.

By now the storm is considerably weaker, with peak sustained winds estimated at 80 knots, category 1. According to the cyclone phase space diagnostic of Prof. Robert Hart at Florida State University, Phanfone is in the process of extratropical transition, turning into an extratropical or “winter” type storm. It has lost its eye and most of its circular symmetry, as one can see in the current infrared satellite image, and is forecast soon to lose its warm core. In a current weather map with colors showing temperature at 850 hPa (about 1.5 km above the surface; this is actually a plot from the most recent 12-hour forecast made by NOAA’s GFS model about 12 hours ago, image courtesy weather.unisys.com), one can see the strong contrasts associated with fronts, typical of extratropical storms, cutting through the center. The strongest rains will be on the left side of the track – over land – as the moist tropical air rides counterclockwise up and over the colder air mass to the west. 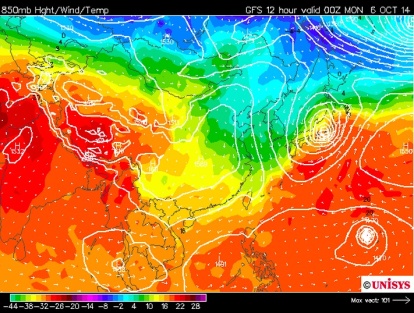 Despite its weakened status, Phanfone is still no joke. The rains will likely be in the hundreds of mm (100 mm = about 4 inches), including likely on Mount Ontake, the volcano where over 50 people died in the recent eruption and the recovery of bodies is still ongoing.

The storm surge forecasts appear to be in the 1-2 meter range, or 3-6 feet. The warnings appear to be concentrated in Fukushima prefecture, site of the 2011 tsunami-induced nuclear disaster. While storm surges and tsunamis have completely different causes, they are otherwise very similar phenomena – either way something pushes the sea onto the land. The 1 or 2 meters this typhoon is forecast to produce are nothing compared to the 40 meters that the earthquake of three and a half years ago produced, so that’s good. But still… I have no detailed knowledge of the current state of the Fukushima Daiichi nuclear complex, but my understanding is that it is still not in particularly great shape. I hope that 1-2 meters of surge plus combined heavy rains and wind aren’t enough to do any more serious harm to this already awfully blighted place.

In news coming in now: images of flooding, and speculation that Tokyo, almost directly in the path of the center, might see an all-time record for strongest wind.

On August 12 and 13, a new record was set for the most rainfall in a 24-hour period at any location in New York State. 13.57 inches of rain fell in 24 hours at Islip MacArthur Airport in Long Island. (That’s about 345 mm, for anyone outside the US.) This breaks by about 2 inches the previous NY State record, set just three years earlier, in August 27-28 during Hurricane Irene in Tannersville, NY.

The new record was officially verified by the National Weather Service just this past Wednesday, in this Public Weather Statement put out by our local office, in Upton, NY (which happens also to be on Long Island, not far from where the record-breaking rainfall fell).

The same office has also put up a nice web page on the details of the event, featuring lots of maps and charts for weather nerds. Their summary of the meteorology reads as follows:

“An anomalously deep upper level trough was moving into the northeast the morning of August 13th, transporting deep moisture over Long Island. At the surface, a parent low pressure system was moving across southeast Canada, with secondary low development just south of New York City. Heavy precipitation focused along and just north of the warm front associated with the secondary low pressure system. The mean storm motion was parallel to the orientation of the warm front and was significant in helping maintain heavy rain over Islip, NY for several hours.”

You can watch the radar animation on the web page and see what was going on. Not only was the “mean storm motion … parallel to the orientation of the front”, but the shape of the storm, as evident in the radar reflectivity (which is a very close indication of where rain was falling and how hard), was roughly linear and oriented along the front. The storm was like a long thin snake moving almost exactly straight ahead, with no component of the motion perpendicular to itself. Any point below it stayed below it as it moved.

This is often how the very highest rainfall totals are achieved at single locations: not just a hard rain, but a hard rain staying in the same place for a good while. This means either a storm that sits still – as in the record-breaking floods in Boulder, Colorado last September – or one that is so large that it takes a long time to entirely pass over, even though it’s moving. Tropical cyclones in particular can rack up huge accumulations, as they are sometimes all of the above: big, dumping prodigiously, and slow. Irene in 2011, our previous record-breaker, was an example of this.

Or, a storm like this Islip system – long in one direction and moving in exactly that direction – can do it.

Mountains help. A strong wind carrying moist air into the side of a mountain – where it will be forced uphill, cooling as the pressure drops and condensing the vapor – is a key ingredient in a lot of records, including the previous one set in Irene in Tannersville. That town is in the Catskills, right up against Hunter Mountain, a popular ski resort with a summit 3200 feet high (a respectably big mountain in this part of the world). In this new Islip record, though, no mountains were involved. Long Island is quite flat.

While the new record is for the 24-hour rain total, the time series graph of rain rate and accumulation on the NWS page shows that most of it – about 10 inches – fell in just 2 hours. This rapid dump made for some very severe flash flooding. The page shows many photos of cars submerged and washed off the road, as described in the New York Times story the day after.

Yes, this is exactly the kind of thing we expect to happen more in a warming climate. A warmer atmosphere can contain more water vapor, and that gain can be realized in extreme precipitation events (even though global average rainfall will increase more slowly than water vapor does, because it is constrained by global energy balances which don’t track water vapor and can’t change as easily). So records like the one that just broke are going to break more frequently than they used to, and already are.

I’m sorry I wasn’t in Islip to see 13.57 inches of rain – or even in the city, which got a couple inches; I was out of town altogether. (I have seen a daily rainfall in that ballpark just once, in Darwin, Australia, where I had gone specifically to see it, which is a story I will write about another day.)  But just so we aren’t too awfully impressed, the global record for 24 hour rainfall is 1.825 meters, or 71.8 inches. That’s more than 5 times our new New York State record. This record was set on La Reunion, an island in the south Indian ocean – in a tropical cyclone, on the side of a mountain.